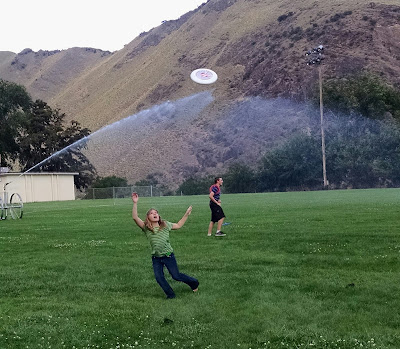 The best one I have to share first because I can hardly contain my excitement any more. Theresa, one of the young teens who’s been coming out to the field each night, said she wanted to become a Christian on Thursday. Michaela Arnold and I got the privilege of praying with her that evening. We ask that she will be given assurance of her faith, because that is the thing she currently struggles with, she wanted to be absolutely sure she actually was a Christian.

Piper Arnold also got to connect with one of the girls on the field who was asking a lot of questions and struggling with depression and understanding God’s love. She and Piper will be in contact in the future.

A few other stories from the last few days…

At the penny parade at VBS, where kids donate money in the form of pennies to help buy farm animals in third world countries, Cordell Bovey donated $10 one day. The next Day his mother Sarah said that he had been working for a while earning money and had saved up $25 for spending money on a trip they’d be taking. The day after he donated $10, he asked Sarah if he could donate the other $15. She said, “It’s your money.” He donated the rest the next day. She said her momma heart was so warm that day.

Kirsten, one of our team, had a birthday on Thursday. We surprised her with a cake.

The parent program for VBS went off without a hitch! The kids were soooo cute. Pictures will be coming soon at www.mygiveonthings.com. There will be a Riggins 2016 Photos tab so check there in the coming weeks.

Hot Summer Nights is a program/city fundraiser that Riggins puts on every year. It’s a two day event with a talent show, picnic games, and car show. There are about 1,000 there each year, coming from all over Idaho. Joshua Salmon and I performed in the talent show, two original songs. We didn’t win, but we had fun!

We finished up with church this morning and the team got to hear Pastor Jim preach. Tonight is the usual Riggins youth-group meeting (since they have one now!) and we get to sit in as attendees, instead of leaders. We’re definitely looking forward to that!

We roll out of Riggins at 6:30am tomorrow, the flight leaves at 12 noon. Arrival on Southwest Airlines at Hobby Airport at 6:30pm. If I don’t post again before then, thanks for praying and keeping up with the trip! We’ll see you all soon!
Posted by stephencurto at 12:18 PM No comments: 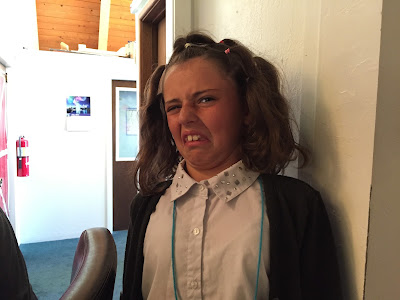 Since the last time I wrote, the team has told me a lot of anecdotes and stories to share.

- A quick update: Audrey let Josh out of jail. There was much feasting and rejoicing.
- Jared’s class goes to rec first. McKenzie Spicklemire was holding chalk in one hand and a cookie in the other. She wasn’t paying attention and mixed them up and bit her chalk instead of her cookie. The look on her face was what made it so priceless. Mixed confusion, disbelief, and disgust were frozen in a single expression. I asked her to do an impression of herself today, which is the photo on this post. (...but the original was much funnier.)
- One of the little boys in VBS, Jackson, has a form of dwarfism, which makes him particularly cute at this age. His belly sticks out a little bit and he’s got a high-pitched voice. He was standing at the front of the rally doing the music motions in front of Erin and spinning around, but he kept looking at Erin while spinning. He would do so by looking up over the top of his head when he was backwards. Erin broke down laughing on stage.
- Ben Salmon is very proud that he has unified his kids as a defense force. Evidently some of the girls find it funny to steal his hat, but the boys in his class have banded together to track them down and get the hat back.
- Zach managed to have an entire conversation with one of the kids by making funny faces.
- The craft idea was a cup of soil with a few beans planted in it, to illustrate the parable of the scattered seeds. All I could think of was the Brian Regan bit about “cup of dirt.” We thought it was a good idea, until the kids all decided to pour out their cups onto the floor and the pews. One of the girls poured it into a pretty decent circle around her and then wondered why we were upset. Clean up was not fun.
- Leah Tees and Josh Talley gave their testimonies on the field last night. Josh had a teen from the town come and ask if she could talk more with Josh about the depression he’s been dealing with, since she’s going through the same thing.
- We had 26 teens on the field last night and some great questions about suffering. I’m blown away by the depth of feeling and honesty the kids have up at the field. They ask the tough questions and make no apologies. It’s made for good conversations.

Looking forward to the rest of today. We’ll see you soon! Please be praying for the rest of the week that more good things would happen.
Posted by stephencurto at 9:46 AM No comments:

Questions and an Interview with Ben 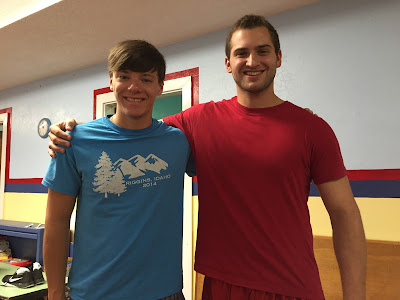 Today was awesome. This afternoon we did a few service projects splitting wood and cleaning yards, and a group went out canvasing. The great thing, from my perspective, was the field night. We had a time today where students could write down questions that they had about anything at all. There was a great range of goofy and serious. Everything from “What’s your favorite movie?” to “How do we know what books should be in the bible?” It was quite a night of thought and questions, and answers.

There were a few fun things from VBS today. Jonathan went on a crazy treasure-hunting adventure with one of the kids, Scot. He would draw treasure with the chalk and they would hunt for it together.

Josh Salmon said that, according to Audrey, he is still in jail until an elephant steps on him. Audrey also made it clear that Benjamin is not in jail.

An Interview with Benjamin:

What is your favorite thing about VBS this year?
All the kids remembered who I was. They started yelling my name on Monday morning. It made me feel SpEcIaL!

What do you most hope happens this week?
Regarding VBS and the kids? That they would come to know Jesus. That’s the whole main goal of the trip, right? For the teens: that they would get the questions they have, answered. For me, getting some of these kinds of questions answered was very critical to growing in my faith.

Who is your favorite VBS kid and why?
Cordell. He is protective of me and my shoulders. And he’s just awesome at everything regarding sports. Or, McKenzie is great too.

What’s your least-favorite thing about Riggins?
What? Why are you making me answer that question? Ummm…. The low sleep… actually no… that I’m sweating while I sleep just enough to where it’s uncomfortable.

Who is your favorite person in the Texas Team?
It’s between Jared, and Zach, and Stephen… and also Nathan. I’m focusing on guys. I don’t want to sound gay, but it’s just true. Oh and Jonathan. Basically all the guys are my favorite on this trip. Oh and all the girls too. I’m not choosing who is my favorite person on the trip! It’s all of them.

What has been most impactful for you in our studies?
The first night when we talked about the idea of life being meaningless, it addressed a lot of the things I’ve thought about myself and reaffirmed a lot of the conclusions I’ve come to.

Jared: I think for me, when someone throws out a caveat or a dissenting opinion, it makes for good discussion and good debate and it makes me think more deeply about the scriptures we’re reading.
Posted by stephencurto at 11:04 PM 1 comment:

I have to apologize for not posting this last night. We didn’t finish family time until about midnight, so I was wiped. We had a few fun things happen to share.

For one thing, VBS Day one was a blast. High energy. We had 22 kids and 17 helpers from Riggins. Today, those numbers went up to 42 and 19 respectively. Josh Talley in particular did a great job with the youngest group of kids, and he said that when he woke up for VBS he was thinking, “eh… vbs yeah… whatever” but by the end of the day he didn’t want it to end.

For dinner we went to the Tucker’s house and Audrey, Pamela Tucker’s granddaughter, was there eating dinner with us. She is a VBS attender. She’s about 6. The consensus was that she was hilariously adorable. Benjamin Salmon said that she was walking around with a broom “putting people in jail” and “shooting people.” There was so much authority in such a little person.

At the field for the first time, we had 22 teens. It’s really incredible to see what’s been happening here in the last year. Sarah and Mark Christensen are helping out at Salmon River Community Church with the youth, and they have a functioning youth group now. Megan described it as “half the high-school” and she’s not far off. It’s truly humbling to see what God has done over the eight years of coming to Riggins.

I should have a more detailed report tonight after the rec night.
Posted by stephencurto at 10:03 AM No comments: